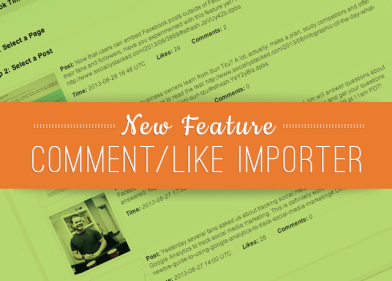 Last month I posted about two changes to Facebook’s terms which pleased me more than such geeky things should – the new terms for competitions which allow likes and comments to be a form of entry into a contest, and the ability to edit posts after they’ve been published.

In the last few weeks I’ve been making much use of both these changes and there are a couple of minor frustrations I feel the need to express by way of an update.

Firstly, using comments and likes as a method to enter a Facebook competition is all well and good – but when you come to contact your winner, Facebook’s restrictions are not.

If you have a winner who you’re not friends with on Facebook (which is obviously going to be the most likely outcome) then contacting them via private message means your note will go into their ‘other’ folder and they probably won’t see it. You’d hope that people who have entered a contest will check the page again, but as we know, that’s unlikely as the vast majority of your page’s followers won’t see the vast majority of your updates.

For me this is a prime example of Facebook’s main problem for brand pages: originally it was a relatively private social network and that’s how many people still think of it. In contrast Twitter’s settings are, by default, public. If you send a DM then the user is highly likely to see it, particularly as the majority of users’ settings will ensure they get an email notification. I’ve never had any problem contacting winners on Twitter directly. Not so on Facebook, where people (rightly) are less willing to be contacted (read: spammed) by brands, even if they have given you a like. No matter how hard it tries, Facebook can’t be Twitter. And I don’t know why it would want to be; they should be different.

Next time I do a competition like this I shall be using something like ShortStack’s comment/like importer to help me capture email address. And sticking with my Facebook tab competitions.

Unless I’m missing something, I don’t think you can edit posts on pages if you’ve posted them via a scheduling tool like Hootsuite or Buffer. Which is really annoying, because I like to use the auto-scheduling function on these tools, but you can’t tag pages using them so I also like to edit posts to add that in on occasion.

Please, anyone who can edit third-party scheduled posts – let me know if it’s just lucky old me who’s having this problem…

Hello. I’m Nicola Slavin. I am an experienced London-based freelance creative copywriter and award-winning digital marketer. Got a project? Get in touch and let’s see what we can do.